I was in Hobby Lobby the other day – LOVE LOVE LOVE that store – and I wanted to pick up a fall wreath for my front door. Not that I don’t already have several, but you know, I’m that kind of chick, soooo….

They were, as my hubby said, pricey. Of course, the wreath that caught my eye was the most expensive in the aisle. Suffice to say, the hubby and I had to come to an agreement, since he was not going to pay $79.99 for something I already had at home. (I tried to argue that, in fact, I did not have that PARTICULAR wreath at home, but just as I’m your average chick, he’s your average guy. He didn’t get it. I had a wreath already, and that was that).

SO…I decided to make one myself. I had already made a few bows for fall. You know the type – the burlap and the plaid. So all I really needed were some letters (they’re only .99 at Walmart) and a twig wreath. I looked high and low for a twig wreath in Walmart, Hobby Lobby, and Target, but no such luck. Can you believe that? Hobby Lobby didn’t have a twig wreath. I know, right?

So I went online when I got home and ordered an 18-inch twig wreath for 3.99. <— Sometimes I can be super cheap and thrifty.

I’m not much of a DIY poster, so I can’t exactly explain step-by-step what I did. I painted the letters and made the bow and hot glue-gunned those suckers onto the wreath. I bought the bells at the dollar store and hot-glue-gunned them so that they hung under the bow.

As you’ll note from the snapshot with all the goodies in it (pictured below), I ended up only using the letters and the bow on the final product. I liked it more simple. That owl though…that unique looking owl reminds me of myself. It’s simply crazy…I love it. That’s about how I look after editing. Since I have leftover burlap and flowers, and that cute little owl, I’ll be making more wreaths (because why not have a dozen fall wreaths?). But I thought I’d share this one with you. 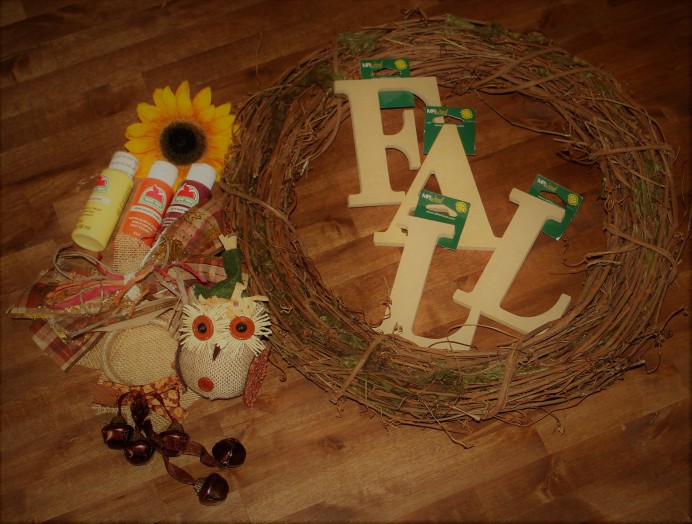 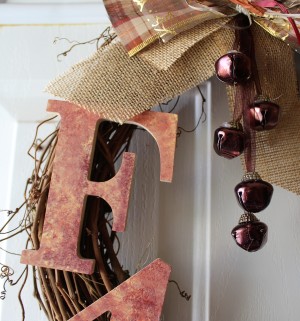 I mixed the three paints together to create that marbled look you see on the letters. In some of the pictures the letters look pinkish, but they’re not. I wanted the colors to match the bow. The paints are made by Apple Barrel (.50 at Walmart) and I used Harvest Orange (LOVE this color for fall!), Barn Red and Pale Daffodil.

So that was it. Cheap, cute, and both my husband and I are happy.