Whew! What a blast! I had SO much fun in Deadwood last weekend. My husband and I went to see the PBR. It was great the first night, which was Friday. Just a little thunderstorm tracked through Deadwood while we were sitting in the covered bleachers, but the temperature was great. There were a few close hits of lightning, but that only added to the atmosphere. Jess Lockwood, Chase Outlaw, Cody Nance – I was on cloud nine watching them ride! These are the top riders in the PBR, and we basically had front-row seats. The AFB (American Freestyle BullFighting) put on a great show as well.

On Saturday the hubby and I went to see Devil’s Tower, because the temperature in that area of the state was pretty chilly. This way we were in the Jeep for most of the time. The temps weren’t too bad while we were hiking around Devil’s Tower. It was fun. Anyone remember Close Encounters of the Third Kind? Well, if you do, you’re probably old. haha

The second night of bull riding we went, grabbed a burger and sat on the bleachers, froze, bought a few sweatshirts from Chad Berger Bucking Bulls, and left before anyone rode. I know. I’m ashamed of myself. But it was raining and FREEZING. Not even the chance to see Lockwood ride again could keep me in those bleachers.

The next day we drove through Custer State Park on the way home. Saw some buffalo. Of course that day ended up being gorgeous. *facepalm*

Jess Lockwood won the event. Not sure what the standings are, but he’s locked pretty tight with Outlaw – and Lockwood was out of competition for a while due to a broken collarbone (if I remember correctly). He’s the one I’ve been pulling for from the beginning of the year.

Here are a few pics! Click on the images to make them larger. 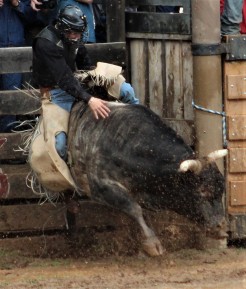